Agustín Carstens, General Manager at the Bank for International Settlements, recently delivered a speech on the topic of inflation at the International Center for Monetary and Banking Studies Geneva on 5 April 2022. Being the BIS’s General Manager, it will not come as a surprise to you that I have decided to devote my presentation to the issue that is top of mind for policymakers around the world, namely the return of inflation. After more than a decade of struggling to bring inflation up to target, central banks now face the opposite problem. The shift in the inflationary environment has been remarkable. If you had asked me a year ago to lay out the key challenges for the global economy, I could have given you a long list, but high inflation would not have made the cut.

This evening, I will describe the rise in inflation over the past year and discuss why this came as a surprise to many. I will argue that the pandemic and the extraordinary policy response laid the groundwork for a rapid and goods-intensive bounce back in demand which supply has been unable to fully meet. The war in Ukraine has further disrupted supply, particularly for commodities. I will also draw some broader lessons about the inflationary process – in particular, the need to look “under the hood” of aggregate data and models to understand how the behaviour of individual firms and workers drives inflation outcomes.

A key message is that we may be on the cusp of a new inflationary era. The forces behind high inflation could persist for some time. New pressures are emerging, not least from labour markets, as workers look to make up for inflation-induced reductions in real income. And the structural factors that have kept inflation low in recent decades may wane as globalisation retreats.

If my thesis is correct, central banks will need to adjust, as some are already doing. For many years now, having conquered inflation, they have had unprecedented leeway to focus on growth and employment. Indeed, with inflation stubbornly below target, stimulating activity hit two birds with one stone. But this is now no longer possible, since low and stable inflation must remain the priority. If circumstances have fundamentally changed, a change in paradigm may be called for. That change requires a broader recognition in policymaking that boosting resilient long-term growth cannot rely on repeated macroeconomic stimulus, be it monetary or fiscal. It can only be achieved through structural policies that strengthen the productive capacity of the economy.

The rise of global inflation

Inflation has surprisingly flared up in the past year. Developments in the United States, the euro area and other advanced economies (AEs) have attracted the most attention. And indeed, almost 60% of AEs currently have year-on-year inflation above 5% – more than 3 percentage points above typical inflation targets. This is the largest share since the late 1980s.

But the rise has not been limited to AEs. Inflation has risen in emerging market economies (EMEs) too. In more than half of EMEs inflation rates are above 7%. Aside from a short period around the Great Financial Crisis (GFC) reflecting very specific and short-lived factors, this is the largest share in over two decades.

Admittedly, the rise in inflation has not been uniform. In Asia, for example, inflation has generally risen less. But even in that region, most countries – with the exception of Japan and China – have seen a material pickup in recent months. And here in Switzerland, dubbed “the country that inflation forgot”, inflation is the highest since 2008.

At first, in early 2021, price increases were confined to a small number of items. Energy, food and durable goods, such as cars, are the most familiar examples. We tend to think of these as relative price changes resulting from shifts in demand and supply, many pandemic-induced. The items where supply and demand imbalances were concentrated had relatively flexible prices, allowing quick adjustments. Indeed, for a while it was possible to attribute all of the increase in inflation to these items, making it look transitory.

But higher inflation has become increasingly broad based. Since the start of 2021, the share of items in the consumption basket that have seen very large price rises has increased steadily. In particular, growth in service prices has accelerated. Because growth in service prices tends to be more persistent than that in goods, inflation may be becoming more entrenched. 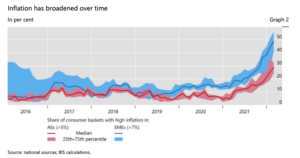 The rise in inflation came as a surprise to most observers. At the start of last year, most expected inflation to remain low. As it began to rise, forecasts were revised up. But, even mid-year, most observers projected only a modest and temporary overshoot of central bank targets. In the end, inflation far exceeded the forecasts. 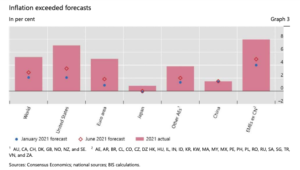 Economic forecasts are often wrong. But the forecast misses in 2021 were unusually large. Indeed, in many countries they went beyond what many regarded as plausible. We were no exception. In our Annual Economic Report last year, we laid out a “high inflation” scenario, based on a standard Phillips curve framework. We found it hard to come up with large numbers.

So why did inflation rise? I would say as a result of the confluence of three factors. First, a surprisingly strong global rebound in aggregate demand: the global economy is expanding much more quickly than in the post-recession recoveries of recent decades. Second, a surprisingly persistent rotation in demand towards goods and away from services, particularly customer-facing ones. And, finally, a surprisingly unresponsive aggregate supply, which has found it hard to keep up with surging demand.

These shifts did not appear out of nowhere. The world economy is in a very different place than three years ago because of the pandemic, the extraordinary fiscal, monetary and regulatory response to it, and the war in Ukraine. Let me discuss in more detail how demand and supply behaved during the expansion – and the role of the pandemic and policy response in shaping them.

When the pandemic broke out, many feared that the hit to aggregate demand would prove persistent. Some observers drew parallels with previous finance-driven recessions. Given the size of the initial downturn, comparisons with the Great Depression didn’t seem entirely out of place.

And there were widespread concerns about “scarring”: consumers and businesses would hold back expenditures – once bitten, twice shy – and a trail of bankruptcies would cripple production. The remarkably fast recovery, particularly in AEs, has put those fears to rest. The 2020 recession was deep as activity was artificially repressed. But when Covid constraints lifted, output bounced back. The much-feared wave of bankruptcies did not materialise. In many AEs, GDP is on track to return to, if not exceed, its pre-pandemic trend. By some metrics, labour markets look even tighter than they did pre-Covid. 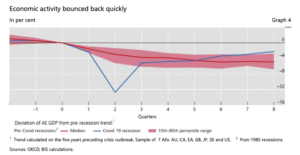 But the strength of the recovery was not entirely due to the unique nature of the recession. The exceptional policy response played a key role. Early in the crisis, it helped firms and households withstand an unprecedented loss of income and forestalled serious financial disruptions. This paved the way for a rapid recovery. Over the past year, macroeconomic policy continued to support aggregate demand. In some countries, this involved continued fiscal stimulus, long after the worst of the recession had passed. And, almost everywhere, monetary policy fostered highly accommodative financial conditions, even in the face of strong growth and rising inflation. The initial policy response to the pandemic was meant to provide a bridge to the recovery. With the benefit of hindsight, policy settings, at least over the past year, may have served as a springboard for the rapid expansion.