The Basel Committee published the results of its latest Basel III monitoring exercise based on data as of 31 December 2017. The Committee established a rigorous reporting process to regularly review the implications of the Basel III standards for banks, and has been publishing the results of such exercises since 2012. For the first time, the report sets out the impact of the Basel III framework that was initially agreed in 2010 as well as the effects of the Committee’s December 2017 finalisation of the Basel III reforms.
Data have been provided for a total of 206 banks, including 111 large internationally active banks. These “Group 1” banks are defined as internationally active banks that have Tier 1 capital of more than €3 billion, and include all 30 banks that have been designated as global systemically important banks (G-SIBs). The Basel Committee’s sample also includes 95 “Group 2” banks (ie banks that have Tier 1 capital of less than €3 billion or are not internationally active).

The final Basel III minimum requirements are expected to be implemented by 1 January 2022 and fully phased in by 1 January 2027. On a fully phased-in basis, the capital shortfalls at the end-2017 reporting date are €25.8 billion for Group 1 banks at the target level. This is more than 70% lower than in the end-2015 cumulative QIS exercise and driven mainly by higher levels of eligible capital.
For Group 1 banks, the Tier 1 minimum required capital (MRC) would increase by 3.6% following full phasing-in of the final Basel III standards relative to the initial Basel III standards. Compared with the previous cumulative QIS (based on end-2015 data), the impact on MRC has increased from –0.5% to 1.7%, excluding the effect of market risk to make the two studies comparable. The differences are partially driven by more conservative assumptions for the implementation of the revised operational risk standards in some countries. 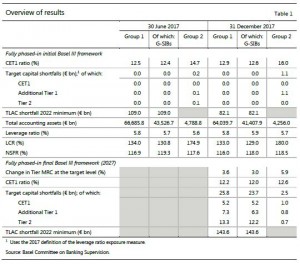 The initial Basel III minimum capital requirements are expected to be fully phased in by 1 January 2019 (while certain capital instruments could still be recognised for regulatory capital purposes until end-2021). On a fully phased-in basis, data as of 31 December 2017 show that all banks in the sample continue to meet both the Basel III risk-based capital minimum Common Equity Tier 1 (CET1) requirement of 4.5% and the target level CET1 requirement of 7.0% (plus any surcharges for G-SIBs, as applicable). In addition, applying the 2022 minimum requirements for total loss-absorbing capacity (TLAC), eight of the G-SIBs in the sample have a combined incremental TLAC shortfall of €82 billion as at the end of December 2017, compared with €109 billion at the end of June 2017.

The monitoring reports also collect bank data on Basel III’s liquidity requirements. Basel III’s Liquidity Coverage Ratio (LCR) was set at 60% in 2015, increased to 80% in 2017 and will continue to rise in equal annual steps to reach 100% in 2019. The weighted average LCR for the Group 1 bank sample was 133% on 31 December 2017, compared with 134% six months earlier. For Group 2 banks, the weighted average LCR was 180%, up from 175% six months earlier. Of the banks in the LCR sample, 99% of the Group 1 banks (including all G-SIBs) and all Group 2 banks in the sample reported an LCR that met or exceeded 100%. All banks reported an LCR at or above the 90% minimum requirement that will be in place for 2018.

Basel III also includes a longer-term structural liquidity standard: the Net Stable Funding Ratio (NSFR). The weighted average NSFR for the Group 1 bank sample was 116%, while for Group 2 banks the average NSFR was 118%. As of December 2017, 97% of the Group 1 banks (including all G-SIBs) and 95% of the Group 2 banks in the NSFR sample reported a ratio that met or exceeded 100%, while all banks reported an NSFR at or above 90%.
Source: www.bis.org