The Bank for International settlement (BIS) develop a stylised shadow banking map for China with the aim of providing a coherent picture of its structure and the associated financial system interlinkages. Five key characteristics emerge. One defining feature of the shadow banking system in China is the dominant role of commercial banks, true to the adage that shadow banking in China is the “shadow of the banks”. Moreover, it differs from shadow banking in the United States in that securitisation and market-based instruments play only a limited role.

With a series of maps we show that the size and dynamics of shadow banking in China have been changing rapidly. This reveals a marked shift in the relative importance of different shadow banking activities. New and more complex “structured” shadow credit intermediation has emerged and quickly reached a large scale, while the bond market has become highly dependent on funding channelled through wealth management products. As a result, the structure of shadow banking in China is growing more complex.

Banks have been the dominant player in China’s shadow banking system. This is why it is sometimes dubbed the “shadow of the banks”. In contrast to shadow banking in the United States, securitisation and market-based instruments still play a rather limited role in China. As visualised in a series of maps for the period 2013-2016, the structure of the Chinese shadow banking system has been evolving rapidly. 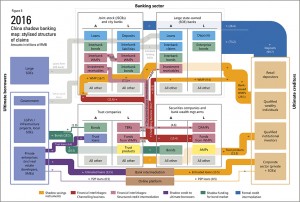 While growth of shadow credit to ultimate borrowers has slowed, the use of shadow saving instruments (eg wealth management products, trust products) has continued to expand at a fast pace. New and more complex “structured” shadow credit intermediation aimed at reducing banks’ regulatory burden has emerged and quickly reached a large scale. The bond market has become highly dependent on funding channelled through wealth management products. As a result, Chinese shadow banking is becoming slightly more similar to US shadow banking.